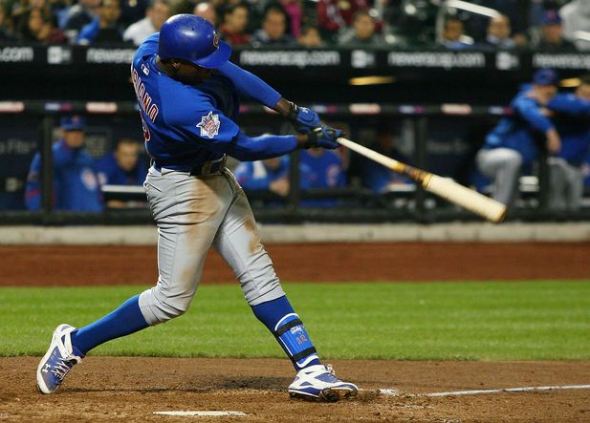 Last night Cubs outfielder Alfonso Soriano hit his 4th home run of the year and 376th of his 15 year career. The career that started as a role playing infielder on the bench of the late 90’s early 00’s Yankee Dynasty followed by a trade to Texas (A-Rod deal), Washington, and now the Chicago Cubs. While he has been known to make headlines from time to time, he has had a rather quiet career.

But will Soriano get to Home Run number 500?  Lets break it down:

Manager Dale Sveum looking to give him a day off here and there because Soriano is 37 in United States years and I say that will full suspicion because many foreign players lie about their age in the States to play longer and make more money. This is a factor because players normally start to decline after 35 years of age.

The Cubs are rebuilding and may not want a 37 year old eating up a position that they can give to a young stud to gain experience. But on the flip side, these young studs need a veteran to look up to and learn from.

Injuries: In his favor

He isn’t hitting them to the moon every game but he is hitting them over the fence just enough to be feared. He has averaged 26.2 Home runs a season since 2008. 2008 & 2009 he was injured and still had 20+ home runs. Say he hits above average this season at 28 home runs (He hit 32 last year) and dwindles each year soon after (Using easy math, no algorithm to this method).

This would be his worst case scenario break down in quest for 500:

The key is this season and next. If he can manage to hit into the 30s and then drop off into the 20s and teens as he hits 40 years of age he should get it. I hope he does, I always liked Alfonso Soriano and hope he gets 500. This may be his ticket to Cooperstown if he does.

My predicition: He falls 40-60 home runs short of 500 and is a borderline Hall of Famer

Is Breakfast in Bed the Most Overrated Luxury? »
« This Could be the Best Tattoo I’ve Seen to Date