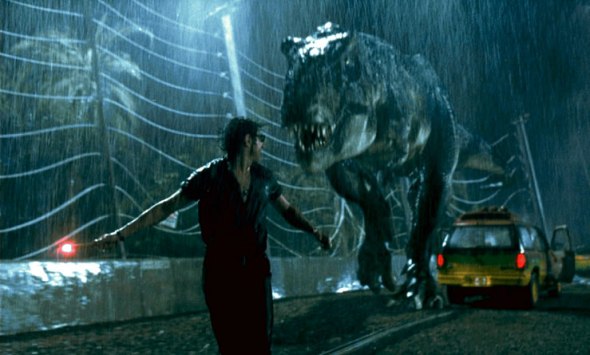 Fox News – Dinosaurs won’t be coming soon to a park near you — although bringing them back to life might be possible.

Indeed, resurrecting long extinct species such as the woolly mammoth, passenger pigeon or other extinct species is the subject of a conference in Washington set to take place Friday at the National Geographic Society. Organizers say rapid advances in molecular biology and new conservation perspectives are creating a new field called “de-extinction.”

Well if this wasn’t a kick in the groin after being knocked to the ground with the “raptor suit” bullshit, I don’t know what is.

Honestly to the organizers that would rather bring back the woolly mammoth over a bad ass T-rex is out of their damn mind. “De-extinction” will be a thing, the only question is when and where. You want to fund the program for this? Bring back to life a T-Rex and sell tickets to see it do it’s thing, it is that simple. No one is going to pay money to see a woolly mammoth act like a fat piece of shit covered in hair.

I’ll fuck you up with some knowledge: having a t-rex show will be like having Mayweather vs. Pacaquiao in its heyday of demand. I’d easily pay $500 to see a T-Rex in person and probably $50 to see it from TV, as long as it was verified it was real and not CGI or a fuckin SUIT.

You know what a woolly mammoth will run you? Maybe $20 a ticket in person, if that.  I’m sure “see a woolly mammoth” is so boring that it will be on Groupon, Google Offers, or Amazon Deals within a week of tickets going on sale.

I’ll even settle for a stegosaurus. Not that much to ask for.

No GOAALLLLLL! »
« Apparently You Shouldn’t Have Sex During Your 16-Month Trip to Mars