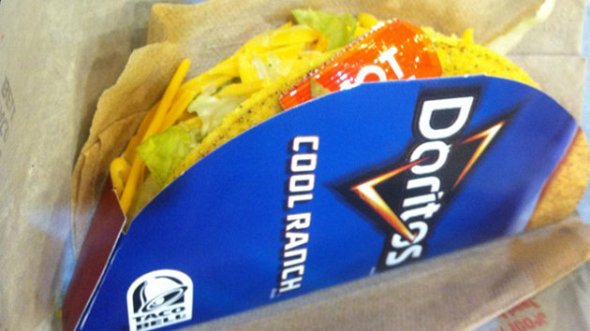 Boston.com – Some Taco Bell fans are angry after they couldn’t get their hands on the chain’s new tacos made with Cool Ranch Doritos shells a day early.

The fast-food chain had announced on Facebook this week that fans would be able to buy its highly-anticipated Cool Ranch Doritos Locos Tacos on Wednesday, a day earlier than planned. But then some fans began posting on the Facebook page complaining that their local restaurants didn’t have them yet. They said they were told by local employees that the tacos wouldn’t be available until Thursday.

‘‘VERY disappointed!’’ one fan wrote. ‘‘Boo to you,’’ wrote another. One fan posted a letter to the chain online, detailing how he and a friend made a trip to their local Taco Bell after midnight Wednesday to get their first taste of the new tacos. He said they ended up getting the regular Doritos Locos Tacos because they were ‘‘basically committed anyway.’’

America at its finest. People legitimately upset because they couldn’t get a taco when they were told they could. Boo fucking hoo. I’m going to go out on a limb and guess the people who flood a company’s Facebook page bitching are the same ones who obsessively write Yelp reviews.

First of all, it’s obviously going to be overrated. The nacho Doritos taco was the biggest disappointment to date. Barely taste the nacho and it is a fucking mess. Secondly, if you wanted it so bad, buy a bag of Cool Ranch Doritos and make nachos or something. I don’t know what to tell you. Maybe just wait like a normal person or stop bitching like a stubborn child? Just spit ballin’ here. Or you could just not be a fat fuck and wait the extra day. FOOD for thought…ya see what I did there?