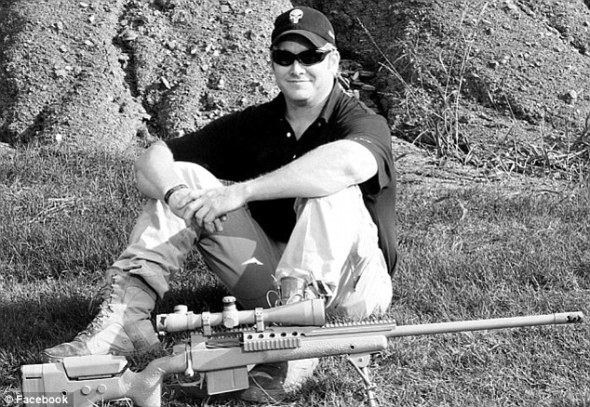 ABC News – Many Americans are only now hearing about the legendary exploits of former Navy SEAL Chris Kyle, who was killed in Texas Sunday, but Kyle earned a reputation as a hero among his colleagues and a terror to his enemies years ago on distant battlefields.

With more than 150 confirmed kills, Kyle was undisputedly the deadliest sniper in American history before he left the military in 2009. He wreaked such havoc on Iraqi insurgents during the Iraq War that they reportedly nicknamed him the Devil of Ramadi and put a $20,000 bounty on his head.

In his memoir, “American Sniper,” published early last year, Kyle wrote about what was to become his most famous shot — taking out an RPG-wielding insurgent at 2,100 yards. The kill was one of the longest sniper shots in history. At such distances, snipers have to take the rotation of the earth into account when making their calculations.

As many of our readers know, B-Minus Blogs is very pro-America and we try to leave the politics to the assholes on TV. We love our country, careless about the government, and always support our troops. This past weekend an American Hero was gunned down in a Texas gun range (allegedly) by a soldier he was trying to help.

You may have never heard of Chris Kyle, but you should. He is the most lethal sniper in American history, a hero to his comrades, and a hidden terror to his enemies. He may be remembered for his number of kills, but think about how many lives he SAVED! Preserving life is the goal in battle, not destroying an enemies life. It is said that Mr. Kyle was a gentle soul that was a better husband and father than he was a sniper.

He was one of the lucky veterans who did not suffer from serious post traumatic stress disorder (PTSD).  PTSD is when you have nightmares and serve anxiety or flashbacks to times in battles. Sufferers of PTSD have strong, uncomfortable reactions to situations that remind them past events. Mr. Kyle did his best to help returning warriors handle their PTSD. It is being reported that the Mr. Kyle’s alleged slayer was a friend of his that suffered PTSD, although nothing is confirmed at this time.

The B-Minus Blogs team asks you to, if you can, to make a donation in his memory and the memory of all those who died defending our nation.

This is the charity Mr. Kyle started with friends to supply wounded warriors with home workout equipment and much more to help them.

This Charity, America’s Mighty Warriors will help the Kyle Family in their tough time.

To honor, thank, support, and encourage the troops and their families and remember the sacrifice of my “Mighty Warrior” Marc Alan Lee, the first Navy SEAL killed in Iraq. To accept the challenge from his last letter home and “pass on the kindness, the love, the precious gift of human life, through random acts of kindness” that will impact and honor our military, the fallen and their families for their selfless service and sacrifice.

God Bless America and all those who serve her.

Table for One Takes On a Whole New Meaning »
« What’s the Deal With Reenactment Actors?

One thought on “Rest in Peace Chris Kyle”